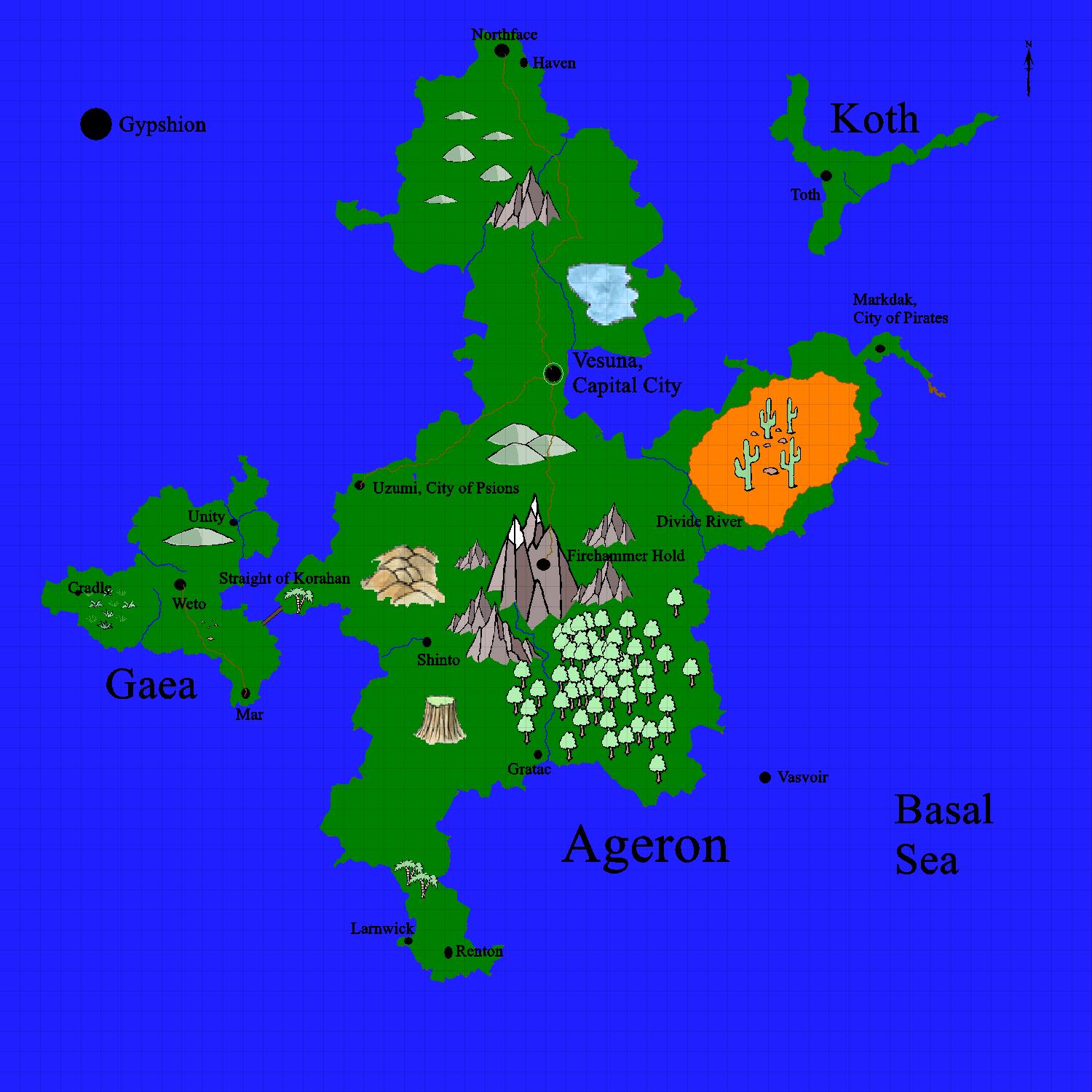 Firehammer Hold: Pop: 13,750. This dungeon keep is stocked almost exclusively by dwarves. Comprised mostly of miners, blacksmiths, and artificers, this city gets the majority of its food from Vesuna's farmers in exchange for trading metal materials and gemstones. The city, while not the most open to visitors due to its remote location enterance, is very hospitable to those who choose to visit and assist them in their needs.2)

Larnwick Town of population 5776 4) This town is on the western tip of the southern peninsula.

Toth, City of Necromancers: Pop 15,000. While by no means is everyone here a necromancer, this place has been the thorn in the side of the kingdom. Located on the island of Koth, the city is ruled by a handful of powerful families who are constantly scheming to attack and weaken each other, meaning that the city never focuses its attention on expanding outwards.

Koth (Island) This island is fairly thin, meaning exploration has been quick. It's swampy, wet, and corrupted by a strange, dark magic, making it highly inhospitable for most life forms. The one city is Toth, which is described above.

Settled on the massive levitating chunks of earth north of Vesuna, this city is as mysterious as the levitating rocks themselves. Little is known about this small city given its location and secluded populace. Inhabited mostly by nomads, this city is a place of boisterous festivities and lively carnivals. Once every decade the city hosts a grand event filled with mysterious magic and wonders; it is only held when the sun has set and is so named, The Night Circus. Little is known about this event since talking about it in anything other than vague details is impossible once the circus has concluded.

Located in a mountain valley southwest of Firehammer, originally a closed door religious convent of the followers of Emizzair (Em for short) that is now a small trading town. The town boasts the Exotic business league, a moderately productive renovated iron mine, and a Tor’ite barracks as well as the original temple to Em. While all major faiths deny that em exists and no proof of his presence is apparent, the followers still worship avidly. The region around Fadenwood is known for its meteor showers and the strange metallic ore that lands there.