Toth is the only city on the island of Koth. It's dominated by a handful of elite necromancers, and is home to a population of about 15,000.

For millennia, Toth has been ruled by a handful of elite families of mages. In particular, the city is dominated by necromancers and, to a lesser extent, other earth mages. Traditional law doesn’t quite apply in Toth, as the entire island is often in chaos due to inter-family conflict, in which the oligarchs vie for power against each other. This has prevented the city from retaking the wilds of Koth, as the families often sabotage each other when they try to rebuild the ruins.

There are rumors in the city of a clan of rugged survivalists living out in the wilds of Koth, but nobody can actually confirm their existence. The city government officially denies the existence of the Rel'yae, but that doesn't stop a handful of inquisitive and audacious individuals from attempting to make contact. In fact, several of the city's smugglers are supposedly using their rural connections to help transport their goods.

Not much is known about The Black One by the general public. He’s worshiped as a god by many of the more nefarious denizens of the island, but doesn't tend to make too many public appearances. It is thought that the Black One defends the islands from assaults from the mainland. On the few occasions where he does bother to conduct his business in the open, however, it's almost always done so to make a flamboyant and violent show of power against his enemies.

In this region, priests are much less numerous than they are on the mainland. The mages of the region have zero appreciation for the gods, as they don’t like any additional oversight into their more unscrupulous activities. This often means that priests are left death threats or, in some cases, completely disappear. In the past, priests have frequently tried to retake or cleanse the island, but have always failed due to the numbers advantage that the necromancers boast, combined with their brutal and ingenious tactics.

The Black One is currently worshiped as a god by most of the city's citizens who are influential or nefarious. He prefers to keep his worship more subtle, relying more on favors and loyalty than grandiose temples and statues. The Black One has no priests, but instead recruits those he views as talented allies to spread his faith and influence.

At the current moment, Ra’ites and Tor’ites have enough forces to hold a small presence on the island, but the sheer number of local mages is too much for them to claim the city for their own. While none of the families may currently challenge the priests, it’s only a matter of time before the ghoul-callers come knocking on the temple doors with hordes of undead.

If there were any location of Jaern in which the worship of Rudri was tolerated, Koth would be it. Rudri, being a god of chaos and darkness, thrives off of the behaviors of the island’s inhabitants, and loves how everybody is backstabbing and preying off of each other. Hirudos are common in Toth.

Isis keeps a relatively lackluster presence on the island, as she is cautious to send her priests to an island that has been so horribly corrupted by death magics. Additionally, the oligarchy dislikes how Isis disrupts their supply of corpses to resurrect, and intentionally sabotage her priests.

There are little to no Osirisites on the island, as most of the land and local wildlife has been corrupted by dark magic. As such, Osiris does not feel like it is appropriate to send her emissaries to a place in which the undead are as nearly as common as the living.

Zepherinites on the island are primarily fighting against the defilement of corpses. They vehemently despise both the cremation of corpses, putting them at odds with many local ra'ites.

Taurus is a relatively well-received god on the island, especially among intellectuals and members of the oligarchy. The families tend to be pretty secretive, with a high preference towards subterfuge, and are always hoarding knowledge of their dark magics. As such, Taurus reaps pretty high informational profits from the island, as everybody is hoarding secrets from each other. 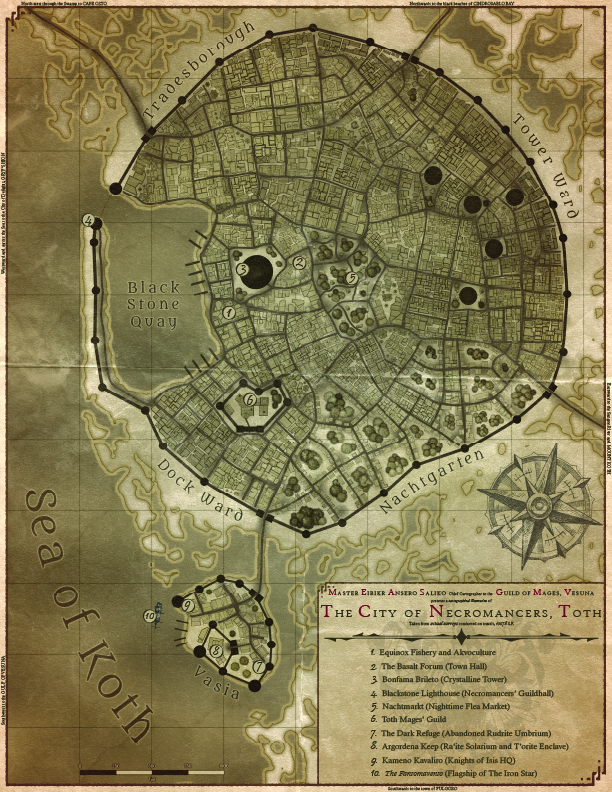 The Kahl-Er family used to be, by far, the most powerful family in the entire city. The late Lord Caldevitch, a master necromancer, was so incredibly powerful that he single handedly forced the other families to their knees. However, Caldevitch has recently deceased, leaving all of his family's resources to his only son, Gerald. Caldevitch did have a daughter, Lisa, but she was killed in the year 10072, as her father's funeral was attacked by fire gremlins.

The Vas-N'yar family consists of sophisticated elves, who are almost never seen in daylight.They have peculiar features, such as pale skin and beautiful, angular facial structures. Some individuals whisper that the family members have cannibalistic tendencies to feed off of the peasantry. The Vas-N'yar have an abnormal disdain for Ra, Tor, and Isis, and become visibly uncomfortable in the presence of their temples, holy symbols, and priests.

The Ghutan family is interesting in that their undead are highly skilled, often retaining their entire life's memory, making them infinitely more dangerous than most normal zombies. The most infamous of their forces are their death knights, which are highly trained warrior liches, who could easily go toe to toe with even the strongest adventurers.

The Ker'Lacht lineage actually aren’t necromancers, however, they dabble in stranger, darker rituals. The Ker'Lacht family is one of the rare groups of lizards within the city walls. They’ve been rumored to consort with demons, and possibly even selling off their children to demons to bargain for power. Out of all of the families, the Ker'Lacht clan relies the least on magic, and is more dependent on wit, skill, and ruthlessness.

This strange elf is, by all accounts, completely insane. He has the body of an elf, believes he's an orc, and speaks with a dwarven accent. Even more strange is how he has all of the mental attributes of an orc to go with his purely elven physiology. Typically, this character is seen wearing haphazardly applied makeup, visual prosthesis, and “orcish” costume choices to disguise himself as an orc. This character is a butcher by trade, but is handy with his knife and nomadic incants.

The central square of Toth is a spacious plaza, surrounded by several of Toth's most important buildings, such as the Bank and City Hall. In the middle of the square stands a mysterious, crystalline tower. Though the tall, dark structure is frequently gazed upon by the public, nobody in the city knows anything of its origin. Creatures with the “see magic” ability will notice that the tower has a high amount of power.

These spacious docks are critical to the city's economy. The main docks, which are built on top of an ancient, man-made inlet, can house up to 5 large (120 ft long) Metioujo. The docks are surrounded by various warehouses used for commercial purposes, as well as a few inns and brothels for travelers and sailors.

Home to most of the city's government offices and courts.

This bar is the more “rough and tumble” locale, and is the preferred drinking spot of mercenaries and adventurers; it's located right by the city's main gate. The bar is staffed by clumsy, horribly incompetent ghouls, which most of the regulars find humorous and oddly charming, rather than off-putting. This establishment is currently owned by Gerald Kahl-Er.

The Dead Man's Inn is one of the more upscale bars of the region, where most of the powerful necromancers in the city go to drink. It's a fairly nice establishment, and is actually staffed by some of few dwarves on the island. This bar is owned by the Vas-N'yar. This building is adorned with several pieces of artwork paying homage to a strange, dark deity.

This is the largest bank in the city, and is owned by the Ghutan family. The building is well-constructed, and is made of marble. The family uses ghoul labor, which means that the service is typically a tad bit slow, but wealthier individuals are often seen getting speedy service. The sheer quality of the facility's security, in addition to the Ghutan's practical monopoly on the financial industry, makes it extremely popular among the local populace. In particular, the facility is guarded by the Ghutan family's infamous Death Knights, which have publicly dismembered many would-be thieves.

This building is where the Vas-N'yar organize their extensive mercantile businesses. It's conveniently located right next to the city's docks.

Home to a large portion of the goods traded by the Vas-N'yar. While this warehouse is very heavily guarded, successfully stealing some of its good could be extremely profitable if they were resold to the right buyer…

The most reliable legal firm in the city, which is owned by the Ghutans. Though their prices aren't cheap, the family's extensive skills, combined with their abundance of influence within the city, make them favored to win almost any legal case.

This waterfront mansion is home to the Ker'Lacht Lineage. The home has over a dozen points of access that allow members of the family to slip in and out of the house. The property is surrounded by a thick, iron fence, which is covered with strange, mysterious markings.