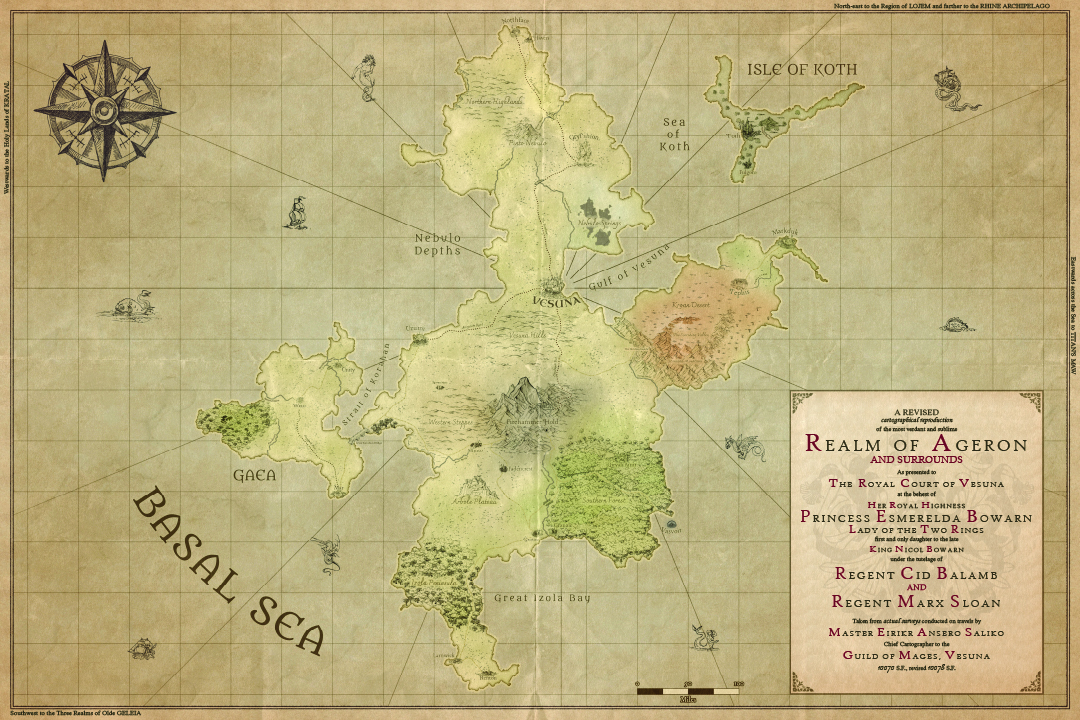 The Island of Ageron is actually fairly new, created by earth mages via the recently rediscovered Mountain spell and spread out over time. It is located in the southern hemisphere almost 3 months travel by boat to the SSW of Lojem. It is about a 5 month journey to the northeast, past Lojem, to reach the Rhine. It takes about 4 months to the northwest to reach Kratal. The island itself has a population of over 200,000, but attempted to remain uncharted for as long as it could, due to the power and terror of stories told about adventurers on the outside islands. Having remained rather peaceful, the island(s) actually ceased to exist for about 30 years. Reasons for this are unknown, but it has returned, causing nothing more than a small tidal wave upon re arrival. Signs point to a massive psionic malfunction in the city of Uzumi playing with time magics. The island itself consists of several large landpoints and cities, which are described below. The island of Ageron is 270 miles long, by 140 miles wide.

Vesuna, the Crown Jewel of Ageron. The capital city of Ageron. Its population is nearing 123,000 people, the majority of which are humans, lizards, and elves. Due to the death of its well-respected king at the hands of adventurers, the profession is no longer welcomed within city limits except for in the Gate Ward, a small district of the city in the southeast. Vesuna is constantly embroiled in political strife, with myriad noble houses constantly vying for dominance. Any adventurer presence within the rest of Vesuna necessitates the word of one of these noble houses vouching for them. Vesuna is a heavily fortified walled city, thought to be impenetrable by any enemy force.

Uzumi, City of Psions: Population 2,300. This city is as it sounds: full of psions; however, it is almost more fortified than the capital itself. Those in the city itself are extremely prejudiced towards non-psions, with an evaluation given at the city gates. Completely reliant on food crops from Vesuna, this city's small population spends its time almost purely in research of psionics, psionic artifacts, and medicine. This city has no temples, and chooses to rely on its own means and strength to heal anyone who is sick.

Markduk, City of Pirates: Population 5000, but rising. As a result of many pirate crews banding together, the way this city behaves has changed immensely. The government is now a form of tribunal, where the four ruling pirate captains meet and discuss issues. A mayor has been appointed as the head of this group, but if you ask most anyone around town they will tell you that the real one in power prefers to stay out of sight. The city now hires out its crews and ships as mercenary protection for the various merchant ships that traverse the oceans of Jaern, which is proving to be quite profitable. This isn't to say that the city has become a law-abiding dream. There are still plenty of opportunities to find shady activities going on, and rumor has it that if someone needs something stolen, this would be the ideal place to ask.

Firehammer Hold, City of Artifice: Population 13,750. This dungeon keep is populated mainly by dwarves. Comprised mostly of miners, blacksmiths, and artificers, this city gets the majority of its food from Vesuna's farmers in exchange for trading metals and gemstones. It is well known for its high-quality exports of all forms of artisan crafts, from smithing to textiles. The city, while not the most open to visitors due to its entrance being quite inaccessible, is very hospitable to visitors.

Koth (Eastern Island): This island is fairly small, meaning exploration has been quick. It's swampy, wet, and corrupted by a strange, dark magic, making it plagued by monsters and highly inhospitable for most life forms. What settlements exist on the island must constantly defend themselves from the threats lurking outside their walls.

Gryf'shion, The Never-ending Spectacle: Population: 1390. Settled on the massive levitating chunks of earth north of Vesuna, this city is as mysterious as the levitating rocks themselves. Inhabited mostly by nomads, this city is a place of boisterous festivities and lively carnivals. Once every decade the city hosts a grand event filled with mysterious magic and wonders; it is only held when the sun has set and is known as the Night Circus. Little is known about this event since talking about it in anything other than vague details is, strangely, impossible once the circus has concluded.