While most Dwarven cultures have social standing based on accomplishments in battle, Ageron has had a long held period of peace, meaning that the youth have required a new way to distinguish themselves. Given their setting it was natural that it would be based mostly upon the ability of an individual to create. The few notable exceptions, the chieftain, and the celebrity wrestlers have their own ways of earning status

Of the clans that were brought to bow under Firehammer,very few have maintained their original traditions. This leaves the Firehammer line as one of the last warrior clans. Thom Firehammer is the present chieftain, and he strictly trains those of this line in the ways of combat. The succession is not decided by direct descendant, but by determining who is most capable of passing the traditions and practices further. Usually this coincides with the most capable warrior of a given generation.

The only other warriors continuing their practice fit in two categories, the first of which being career wrestler. Career wrestlers provide entertainment for masses, and try to keep it relatively official. In these bouts, the wrestlers continue to battle until one runs out of strength, naming a winner. Because it cuts the entertainment short, it's generally considered bad form to knock an opponent out, before they've completely worn themselves out. The most successful of these share a status just below that of Thom Firehammer himself.

There always exists a profession for even the lowest standing to have a chance at greatness. While this spot is usually filled with adventuring, in Firehammer keep, it's a profession with brutal fistfights. This is the bloodsport of the keep, and anyone is able to participate, although most of the fights are held including prisoners and slaves. These fights are extremely competitive, and the rewards a great. This is true to the extent that it's not uncommon to see fighters taking great risks in augmentations. An embedded steel skull(counts as a helmet for crits), or iron spikes on the knuckles(NRR142) can make all the difference and the dwarven constitution allows them to have some chance of survival. This field holds great potential, however, as a very successful fighter can officially become a member of the Firehammer household, and begin practicing the official combat arts.

The rest of the individuals in this keep have their social standings decided by their ability to create. Within this, there are some fields that are considered superior to others. Hard to learn, or complex works gain the most respect, meaning that brewers, metal smiths, and locksmiths are held in the highest regard. Below these professions are professions like armor smithing, and jeweling. The lowest class are those with easy to learn skills, like cooking, writing, and mining. This isn't to say that there isn't accounting for skill in these individual fields, but equivalent accomplishments in these fields will be treated differently.

With how much assistance this community has gotten from technology to be mentioned later, the Firehammer bloodline will provide funding for people wishing to create something new. Most noteable of these is Chomsky a gnome inventor that was the original creature of the clockwork armor.

These individuals are highly shrouded in mystery. They produce nothing, yet they are acknowledged as having high standing by the Firehammer family. Paying is generally considered beneath them, and the Firehammer family will compensate the creator for anything they request. They have been around long enough that nobody seems to question why they have special treatment, seeming to think that it's part of a Firehammer tradition.

All cooking in the keep is very simple, partially because cooks are held in such low regard, and partially because the food only serves to accent the beer in question. Breads and cheeses are frequent accompaniments, as they both have good shelf lives, and accent beer well. Unsurprisingly, since nobody in the keep is willing to produce food, it is one of their main imports from outside. Brewers work with a variety of resources to make their drinks, making it one of the most versatile drinking experiences on Jaern.

Upon death, fearing that, with the sheer mass of earth mages present, the dead will be used to harmful ends, the remains are cremated. This is done in it's own area, which is heated similarly to how the smiths area. After cremation, the family will buy an urn of quality befitting the individual in question, and take the remains to their families mausoleum. Those of the Bloodhammer line will generally choose to have their souls trapped in the urn in which their remains are stored, so they can continue to protect their kin. 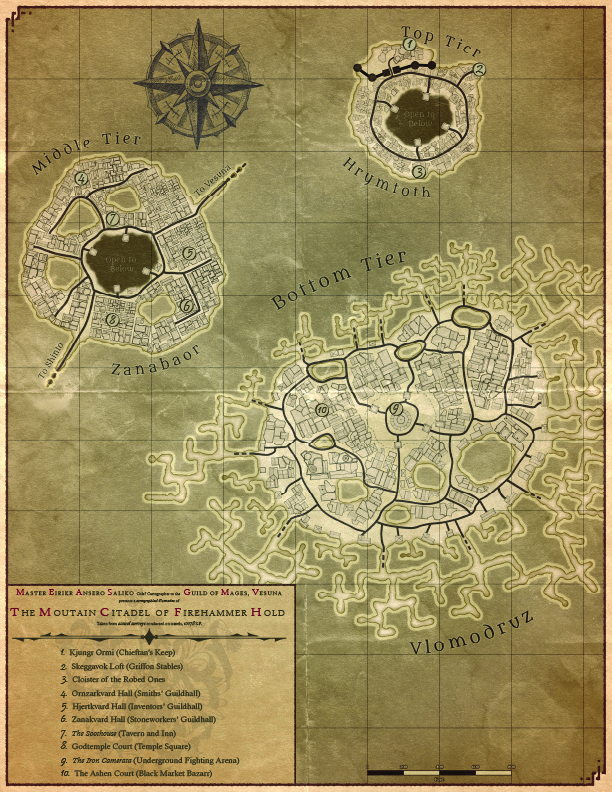 This armor, powered by pumping magical energy into a rune in the armor itself, is useless to those uninitiated, but in the hands of one taught in the Firehammer combat school, exceeds what standard armor is capable of. The ability to use this armor is limited to use by those skilled in the general use of heavy armor skill. This armor quickly falls into disrepair and requires continuous maintenance from the metal smiths in Firehammer. If using Hammerstone guards as npc, a write-up can be found under NRR141.

Based on the steam locomotion on Lojem, the residents of Firehammer Keep have managed to automate a great deal of their mining. They have succeeded in making a drill-like device that bores 7 foot wide holes through the stone. This leads to the vast majority of the city being composed of seven foot wide streets, with buildings mined out of the walls. Nobody really knows how this functions, except the robed one that is stationed to operate it

Because all buildings appear identical from the outside, people flaunt their wealth through designer locks, on their stone doors. Additionally, doors will frequently have grand statues carved into them, but this is considered second in importance to the quality of the lock on the door. The highest end locks function through magical runes, that can only be activated with a password. When activated, these doors have clockwork parts reveal the pathway forward.

Smithing is done above lava pits, used to heat the metal till it's malleable. These lava pits are built into walls, with only enough space to stick the piece through the gap. Nobody knows why these pits work, simply that they have never been known to cool. These pits tend to all be encircling a unused area of the keep. Because of this additional heat, and the advanced tools, it's possible for most skilled smiths to work with adamantite. This however makes it very difficult to obtain, as all mined adamantite is turned into final product.

This bar, complete with a clockwork delivery system, provides high end beer to the denizens. They will begrudgingly provide other drinks, often mocking the individual. They have an extremely complicated clockwork system for delivering alcoholic beverages to their customers from the center area, simply surrounded with kegs. Punishments for violence with the bar is mostly meted out through downgrading drinks served to the violent party. The best bear they serve is a beer brewed in refined teresium, that regenerates six elemental units upon drinking. The first shift bartender is gay, and has 17 seduction skill.

This is a gold forge that also sells the products made there. It is the largest gold forge there in Firehammer Keep and is known for high end products. It is headed by a dwarf name Hephaestus Goldforge who is running the family business. The average quality of the products is 6 die. Custom products are available on request. (Crosby runs this)

This is a store that sells handmade glass products. They do all of their own glassblowing and is the best place in Firehammer to get glass products. It is run by a dwarf by the name of Jarold Crystalhide who is quite a gentleman and wears a monocle. The average quality products bought here are 6 die, the highest made to this point was a 9 die, but it was made only once. They will do custom products. (Crosby runs this)

Due to the method by which the island was created, the mountain itself was originally devoid of resources. To this end, the Mineral spell group was researched, and the hooded ones created.

Gnomes are a new race that have been living in Firehammer for the last 1000 years.

Gnomes are, as most races are, extraterrestrial, but unlike others they are inter-planar as well. They originated from a more more technologically advanced plane. All gnomes on Jaern are descendants of brave souls who risked their life to test out a new device, which brought them to this plane of existence. As that tech plane hadn't discovered inter-planar travel before then, they were written off as casualties, and the research was abandoned. As such nobody came after them, and they were trapped on Jaern with their damaged device. Early generations wanted desperately to return, and focused on trying to build up an infrastructure of technology, with which they could repair the device an return home. After several generations, the reason for this fervor was lost, leaving only an immense drive and fascination with invention. Nowadays, gnomes invent for the sake of inventing, thinking they are honoring their descendants wishes.

Vormaxians are highly respected, and their spell “skillful” is in high demand.