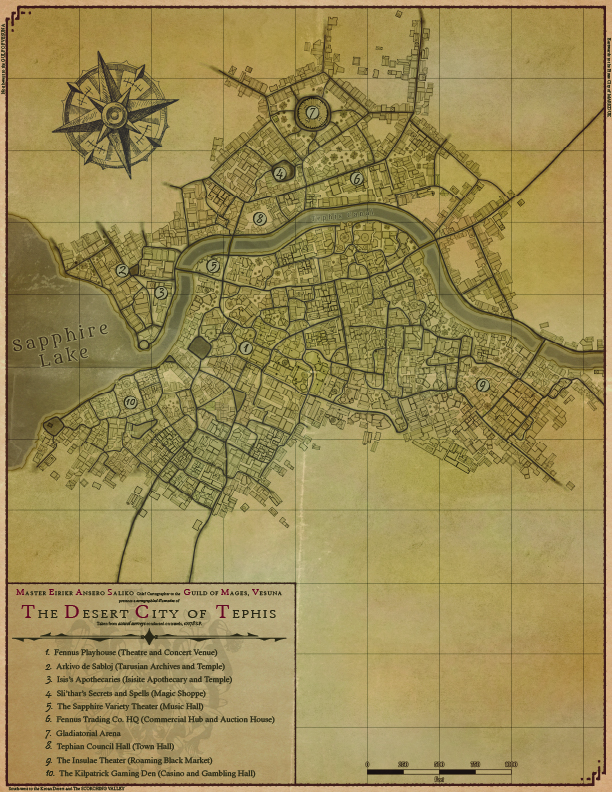 Located on the Sapphire Lake, Tephis is a center of trade and entertainment. Tephis started as a meeting ground, a place for the nomadic tribes of the desert to join together for trading and religious festivals. Over time, some members of the tribes began to stay after the meetings were over, forming a small village. As the years passed Tephis grew, attracting interest from outside the desert. Traders came first, eager to strike it rich buying and selling good with the tribes. Tourists followed soon after drawn by the promise of exotic sights and goods. The city grew rapidly with this influx, and as of now has completely dominated the western shore of the Sapphire Lake. Tephis can be roughly split up into five districts: Entertainment, Religious, Trade, Administrative, and the Slums. The city is tended to by the Tephian Counsel.

By far the largest section of Tephis, the entertainment district is one of the main draws of the city to outsiders. In it, one can find almost every form of pleasure, be it food, drink, drugs, music, brothels, gambling, and much more. One location of note is the Gladiatorial Arena, a popular attraction put on by the Fennus Trade Company.

The smallest of the districts, this section of the city is dedicated to housing the temples and clergy of the gods. All of the gods are represented in an amount equal to that found elsewhere on Ageron, with the exceptions of Ra and Neptune. Ra enjoys a larger than usual following in Tephis due to large amount of sunlight the city receives, while Neptune’s following is smaller due to the distance from the ocean and overall scarcity of water in the desert. The desert tribes keep their temples, as they follow their own animistic religion.

The second largest district of the city, the trade district is a place where fortunes are bought and sold on a daily basis. Spices, clothing, furniture, and art can all be found here, the more exotic the better. Auction halls and stores line the streets, letting one buy almost anything for the right price.

This district serves as the mind of Tephis. It is here where the wellbeing of the city is decided, as laws are passed and decrees are made. The Tephian Council meets here. Also located in this district are the courts and prisons of the city.

Despite the relative prosperity of Tephis, not all in it prosper equally. The slums house the poor and destitute of the city. It is a hostile place for outsiders, who at best might end up with a missing coin purse. Still, for those willing or foolhardy enough to brave the dangers, the slums can be a place of many illicit opportunities. Organized crime and a thriving black market can provide one with many interesting ventures, if they’re willing to take the risk.

The Tephian Council, or just the Council as it is known in the city, oversee the needs of Tephis. It has seven seats, one for each of the tribes and a seventh to act as the voice of businesses within the city. Once a council member has been elected by their tribe, they hold the position until death, retirement, or, in rare cases, impeachment. The current council members are: Tarren Ur of the Moonfinders Annis Tral of the White Snakes Kalias Vin of the Black Snakes Garnith Yorrin of the Bonepickers Orim Gran of the Reed Weavers Fran Rumin of the Sunwalkers Aldous Fennus, owner of Fennus Trade Company The members of the council rarely see eye-to-eye, and constantly jockey for more power for their home tribes. Political intrigue runs through the city like a river, sweeping along Tephis’ inhabitants in its currents. Information on what plots are being funded, what deals are being brokered, and whose backs are being stabbed is almost as valuable as silver. The Council will, however, put their squabbles behind them temporarily in the event of a crisis large enough. The power of the full Council, united to one goal, is frightening to behold. Until that time comes they are content to play their games, using the city and desert as one vast board.

The Fennus Trade Company is the largest trading conglomerate in Tephis. It was founded a century-and-a-half ago by Aldous Fennus, an elf, who saw the potential in the burgeoning city. Since then it has grown to dominate the market, having a hand in nearly half the transactions carried out in Tephis. This power has given Mr. Fennus a place on the Council. There are rumors that Fennus Trade Co. also deals with the murkier side of business within the city, but nothing concrete has ever been proven.

The Gladiatorial Arena is one of the most popular attractions in Tephis. Originating from the ceremonial duels carried out by the tribes at their religious festivals, the fighting in the Arena now is done for fame, money, and power. Fights are carried out around the clock, and the crowds are free to bet on the results. A variety of fighting scenarios are available to compete in. Magic rings are given to the fighters to ensue the fights are non-lethal unless all parties are in agreement. The city has also ruled that civil disputes can be legally solved in the Arena, providing both closure for the parties involved and entertainment to the masses. The Arena is run by the Fennus Trade Company.