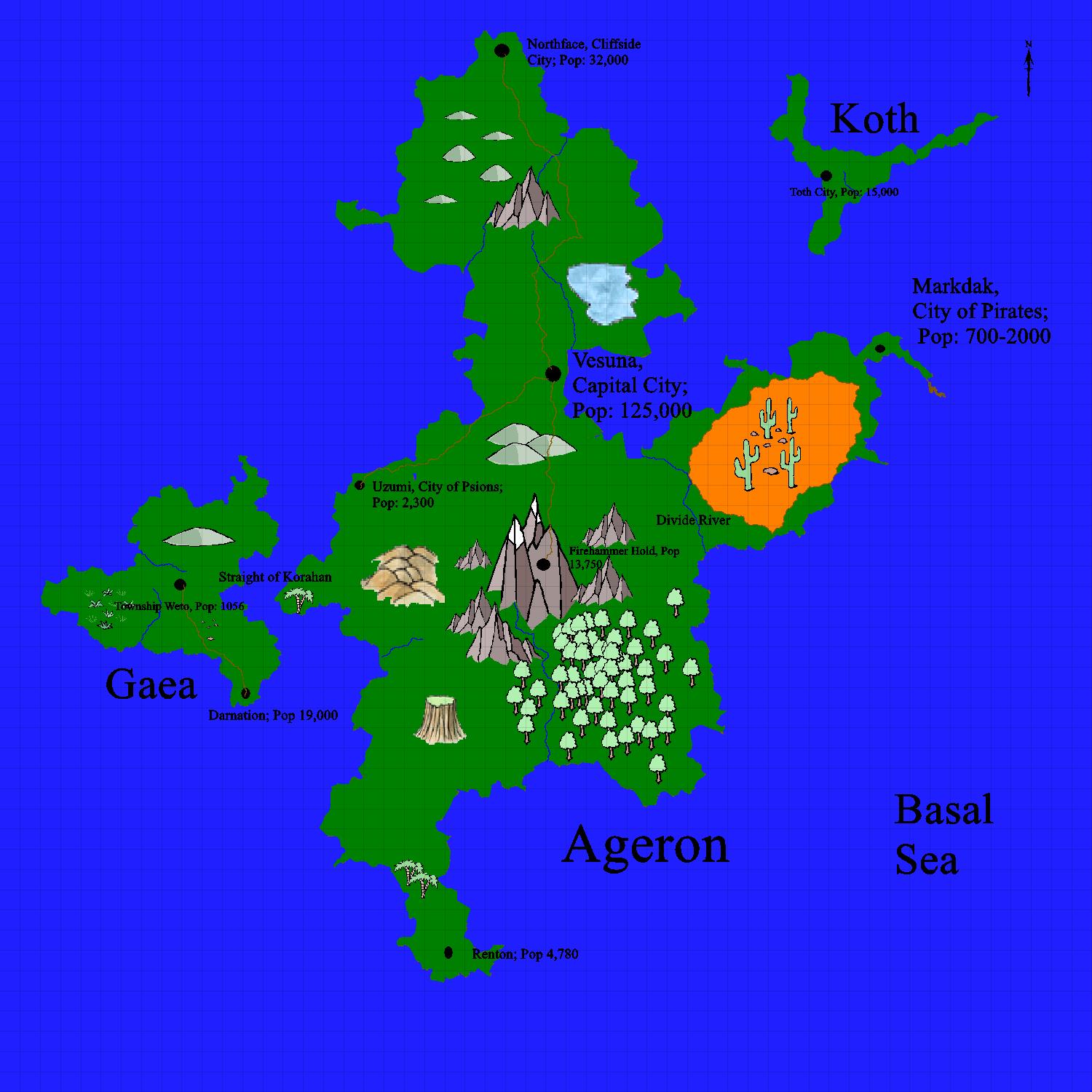 Vesuna The capital city. Its population is nearing 125,000 people, the majority of which are humans, lizards, and elves. The current reigning King's name is Nicol Bowarn, and has been reigning since his ascension to the throne at age 35. He is a proficient mage and alchemist and would rather spend his time tinkering away than deliberating politics. Rumor has it he has found the elixir for immortality, but this is not backed up by any basis. The rest of the city survives well on farming, minor mage work, and trade with Firehammer Hold for iron and other like goods. While this is the capital, unless necessary the majority of the power is delegated to the mayors of each other town, and they take a more passive stance on most political issues. It has been seen though, that if the system needs a fix, Nicol will not hesitate to help the people.

Kroan: Pretty massive desert, not a lot of travelers due to no interesting destinations beyond it besides Markduk City. Temperatures can reach upwards of 120* F here.

Koth (Island) This island is fairly thin, meaning exploration has been quick. Its very swampy and wet, leading the 3 branches to be very difficult to inhabit for those that arent lizards. The one city is Toth, which is described below.

Toth, City of Necromancers: Pop 15,000. While by no means is everyone here a necromancer, this place has been the thorn in the side of the kingdom. Necromancers vieing for power here usually try to attack the city with hoards of the undead, causing casulties. The city has responded by mandating that all citizens perform military service, and the city is constantly ready to defend its walls.

Gaea (Western Island): as of yet, this island is very unexplored. Rumors talk of a species stronger than those seen before…. There is only 2 towns, Darnation (this one is responsible for all the island politics) and Weto, which is mainly just a small town of farmers, hunters, and gatherers. Not much contact with the other islands. (running games here for now - Dan)

Darnation Pop: 19,000. City is fairly straightforward. They are still setting up and exploring Gaea, but have a nice city with a port going. (will be running games here - Dan)

Weto Pop: 1056. Currently just hunters and farmers. There is a single dirt road to Darnation, but it is covered by growth due to not being used. Will update as stuff happens. (will be running games here - dan)