Leviathan is a vast pirate city most commonly found in the Alquarshi Bay, although it could resonably travel anywhere on Cahyali's seas. It is made up of hundreds of shipwrecks, all connected together to create a floating island. 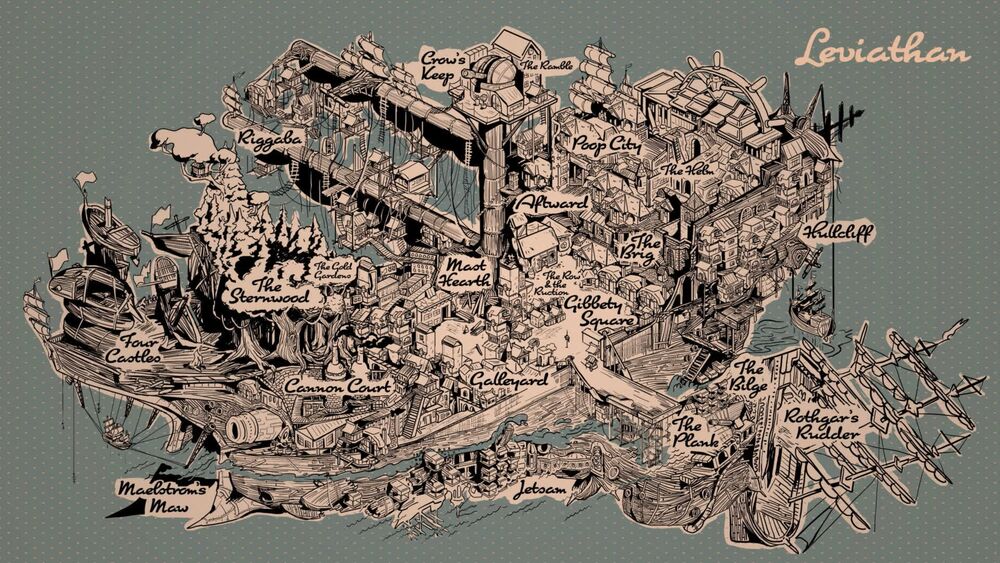 Two enormous wooden structures that jut out in front of the rest of the city like pincers. It uses a colossal trawling net to capture ships and dismantle them for use as materials elsewhere, much like a chop shop. It is managed by the boatswain, and is the main source of incoming materials and supplies to the city.

A dangerous neighborhood located at the fo'c'sle of Leviathan. It is raised up higher than much of the city and is a very violent part of the city as people fight for control of the neighborhoods. You could get killed just for walking down the street wrong.

A forest full of terrible beasts near the entrance of the city. Long ago, some thought that Leviathan should make its own food instead of stealing it, and a group of druids from Buyuk Vahsi tried to make a place in the city with arable ground. It has become cursed forest full of monsters.

A strange, subterranean neighborhood modeled after a dwarven city. It's built with the remains of shipwrecks and hollowed-out hulls in large, public chambers and civic centers. It is inhabited by pirate dwarves and gnomes.

The heart of the city, the “downtown” area of Leviathan. Home to the Gold Gardens. Its nicer neighborhoods are built with flatted pieces of wood and actual consist of buildings, whereas the jankier parts of town are literally built into curved hulls and other scraps. It has an Arenti Colonial (Think New Orleans style) type of architectural feel with second-story balconies and lots of public buildings. The city is filled with a wealth of different seafaring beings, contributing to the chaos of the scene. Gulls and Verraerians fly overhead, and laughter and the occasional pistol shot can be heard. Drunkards who've soiled themselves sleep in the streets. Nearby is The Plank, which for all intents and purposes is considered “shore” under the Pirates Code.

A pleasure house and inn on Leviathan. It offers entertainment, gambling, and sex work, as well as some health and wellness services, such as massages and acupuncture. Residents across Leviathan visit to lose the money they just got as a pirate.

Sits at the base of the mast that holds Crow's Keep aloft (called Mast Hearth). Pinned to the mast in the center of the square by a dagger through the tongue is the head of the old pirate king, hung there and preserved artificially with magic. A sign that hangs from it reads “No kings for a captain”. It's somewhat of a tourist attraction.

A marketplace of banking and trading. Located near Poop City and Gibbety Square, it's home to the Row and the Ruction and the Brig (which is a giant tower of prison cells).

The Row and the Ruction

An enormous warehouse in the Aftward neighborhood. It is the place where political decisions are made in Leviathan. The Row is a raging fist fight on the sawdust covered, bloodstained ground floor that has lasted for 150 years. The Ruction is a web of boards and rigging suspended about 20 feet above the Row. Together, they form a bicameral legislature for the city. If a person can claim enough space in the Row long enough to advance into the Ruction and hold it, they can make political decisions that affect the city. The Row and the Ruction are very rules-light. Weapons and magic, while not specifically banned, are discouraged in the Row as everyone will gang up and try to kill you if you use them. Weapons and magic are allowed in the Ruction. On the wall opposite the entrance to the building is a bar with stools and seats where fighters can rest for a bit and grab a drink before rejoining the brawl. Sputtering torches cover the walls, which have been reinforced time and time again from all the smashing of chairs and shenanigans, as well as the posts that hold the structure up.

The nice neighborhood of Leviathan, located on the poop deck. This is where The Helm is, where the captains, quartermasters, masters, boatswains, and gunners of Leviathan live.

The highest point of the city, a neighborhood lifted about a quarter of a mile above the streets by Leviathan's huge central mast. It can only be accessed through navigating the masts and rigging of Riggaba. Home to the Compass Points Library and the Ramble. Many of the houses at the edge of this neighborhood are in shambles and are half-collapsed into the city below. It is mostly only populated by Verraerians.

The library on Leviathan, located in Crow's Keep. It's akin to a guild of wizards, a place of cultural significance and magic. However, it is splintered and fractured as it had to be fought for and protected from the drunken deprivations of pirates that might not have as active an interest in the preservation of their own pirate culture and magic. The library itself contains many areas that function more like social spaces.

The Ramble is the closest thing Leviathan has to a town hall or court house. It is located in Crow's Keep.

Inside the Ramble building lives the actual Ramble: a collection of Leviathan's oldest pirates who sit and smoke and drink and tell tales of great acts of piracy in the past. They ramble and wax philosophical until a decision can be made through the assembled wisdom of the elder pirates that gathered there.

a neighborhood in Leviathan suspended in the rigging and sails that propel the city. Travelling through Riggaba is the only way up to Crow's Keep. Riggaba is made up of thousands of sails and rigging, hanging ropes and creaking jibs and booms. It contains huge gondolas full of buildings, houses, windows, and all manner of places. It is home to many Verraerian families.

Jetsam is a community located below the waterline of Leviathan, where a large hole in the rotted floor opens up into the ocean itself. Creatures that breathe air must take special potions that create air bubbles around their nose and mouth to allow them to breathe underwater.

As the bottom most part of Leviathan, the neighborhood is cold and dark, and made up of rotted wood. The bulk of the city above blocks out any type of light other than the streetlamps made of bioluminescent algae and faintly glowing coral.

The Bilge is an extremely poor, run down neighborhood many levels below decks. It is misty, damp, and smells of rotting timber. Buildings in the Bilge are constructed of full ship's hulls that have been hollowed out and filled with shacks and multi-apartment tenements. This creates tunnel-like alleys and streets, and a sort of natural, hilly geography caused by the swell of ships' inner keels and hulls. It is inhabited by the people that live better out of the light of the sun: lycanthropes, the vampires, ratfolk, and more. Some claim it to be haunted.