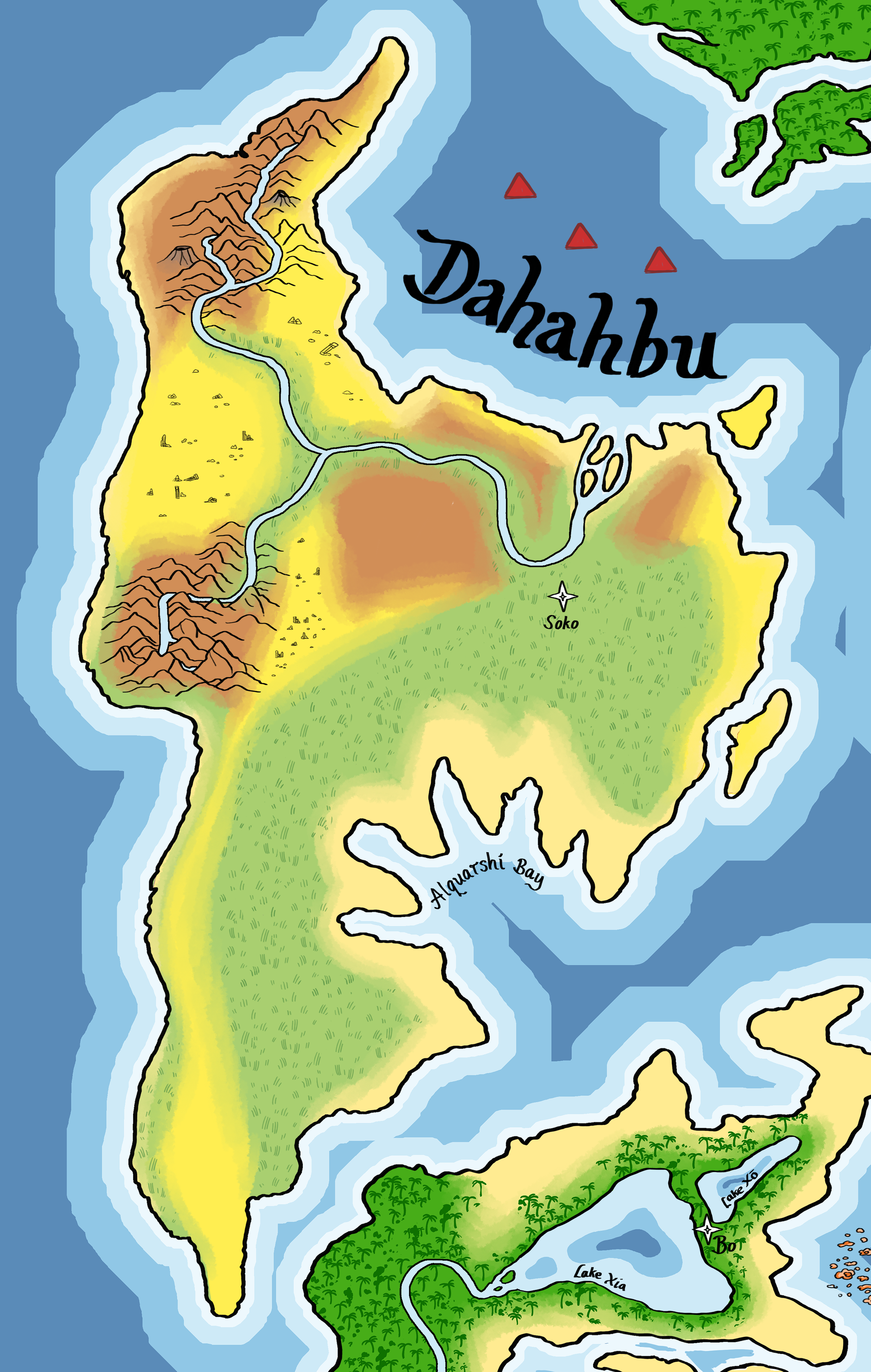 The deserts of Dahahbu are almost entirely unsettled save for the city of Soko. Soko lies on the eastern edge of the desert, acting as an entry point into what lies beyond. Dangerous and almost entirely uninhabited, the creatures that can make their home in the abandoned towers and ancient elven ruins in the desert should be feared. Glistening off in the distance, the abandoned ruins can climb almost as high as the mountains. Just as brutal are the few humanoids that settle in this desert: warlords who feast upon the wanderers, stripping them of everything - soul, body, mind, and magic. As dangerous as the hot sun is, it becomes even more dangerous at nightfall as deadly predators roam.

On the southeastern coast of Dahabu is the Alquarshi Bay, which features many small fishing villages and bazaars to purchase goods. It has become a popular destination for Ruefang researchers to visit, stock up, and hire guides and protection before conducting research in the ruins of Dahabu. Floating in the bay, a towering city built out of the shambled together parts of hundreds of ships stands: Leviathan. It is a floating pirate city the size of a small island, resembling a absolutely massive wooden ship, with dozens upon dozens of masts and sails, and a gaping maw that it uses to reel in unfortunate ships and strip them apart to add to the city. Very rarely, separate cells of the Dahabu, Buyuk Vahsi, and Nahrūl Cerulean Moon factions will choose to have a meeting on Leviathan.

Hidden and buried in the sands of Dahabu may be an untold number of resources and riches. However, the travelling troubadours of Cahyali mainly tell of Milphite Crystals, a rare magical resource found in towering ruins. Rumor states that, many centuries ago, when the calamity that stripped Dahabu Elves of souls happened and turned Dahabu into a desert wasteland, the souls of the elves themselves crystallized with the sands to form these crystals. Whether or not the rumor is true, no one knows. Most people covet these crystals for their magical properties, but those who risk their lives venturing into the Dahabi deserts seldom return.

Witch-Queen's Gambit is a card game that can be played with the Dahabi Tarot, or a standard deck of cards (with jokers) once the 2-8 cards of each suit are removed (leaving only the 9, 10, Jack, Queen, King, Ace, and Jokers). In the Dahabi Tarot, the two suits are denoted as Saedic (Red) and Dahabu (Black), and the six cards in each suit, with two of each, are numbered 1 through 6. There are two additional cards which are the Saedic and Dahabu Witch-Queens (Red and Black Jokers, respectively).

The GM can either bring a deck of cards and follow the instructions above to replicate the actual Dahabi Tarot to play the game, or instead elect to play the game by having each player use 3d6.

At the beginning, each player is dealt 3 cards, face down (given 3d6). They do not look at the cards. They then choose to bet, starting with the player to the right of the dealer and moving counter-clockwise. Any bet made must be matched by the dealer and other players or a player must fold. Once all bets have been called, all players who have not folded may look at their cards (roll their 3d6).

Then, a second round of betting begins, again starting with the player to the right of the dealer. They may call, raise, or fold. If they call or raise, they are allowed to return any of their three cards and be dealt new ones (choose to reroll any of their d6, keeping the new result). This goes around the table until all players have called.

At this point, after all bets are made and finalized, each player lays down their cards. The strength of hands are ordered below, from strongest to weakest:

Depending on where Witch-Queen's Gambit is played, the Saedic Witch-Queen and suit or the Dahabu Witch-Queen and suit may be valued higher than the other. Generally, in Dahabu or Vahsi, the Dahabu suit is higher, whereas in Buyuk, the Saedic suit is higher. Generally, elves of differing opinions on this matter refuse to play together. This is usually clearly stated before the deal or assumed when in the company of either Dahabu or Saedic Elves. When playing with 3d6, ignore this rule except for determining the value of the Witch-Queens.

The pot of bets is then distributed to the winner, or split equally in the event of the tie. Some establishments may take a percentage off the top before this happens.