This island at the far north end of the Rhine very commonly gets locked in ice during the Sekafojo months. Even throughout the rest of the year, ice floes can be seen looking to the north.

There is only one major city on NorthPoint: Aurolis. Otherwise, scattered villages and settlements can be found around the coast, home to fishermen and baleners (baleno-hunters) who meek out a frigid life. 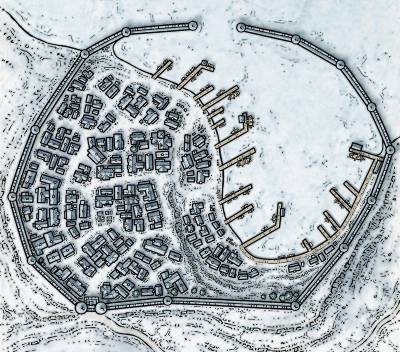 Situated on the northern coast of NorthPoint is Aurolis, a relatively large city with a major port. When the Freeze locks the islands of the Rhine, Aurolis becomes a major hub of shipping and commerce, as all ships traveling to Centralia must either dock here or in Southport.

Aurolis is an independent city-state, and the town is led by a duumvirate republic, with two elected representatives that curently oversee the civil affairs of the town. These two individuals are currently Melanie Vieuxtemps, the head of the Miris Den described below, and Finnegan Cormac, who is also the harbormaster of Aurolis/

Notably, a slayers guild called the Miris Den operates out of Aurolis, providing a place for adventurers to sign for hirings and contracts to deal with monsters and other problems that affect those in NorthPoint and even further north. Members of the Miris Den often benefit from reduced prices in Aurolis, ranging from purchasing gear and prep, to commissioning weapons, armor, or enchantments.