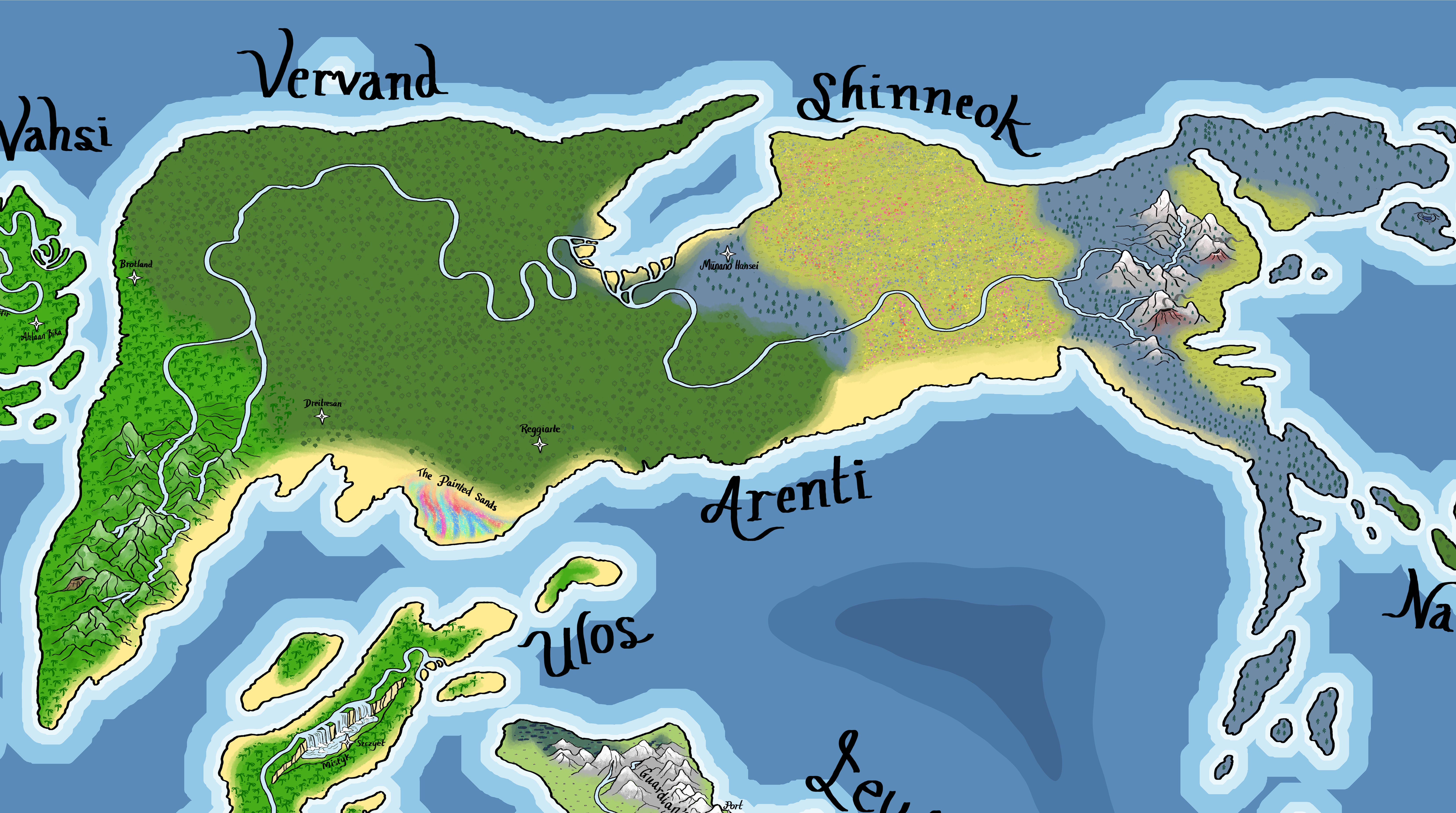 Shinneok features both a flat rolling shrubland, and an expansive tiaga. The Sukēromauntain lines the far eastern border, a mountain range where dragons were rumored to live). Near the capital of Mūnano Hansei is Heiwa, a large botanical garden. The borders between Vervand, Arenti, and Shinneok are incredibly loose, as the countries are very close.

Shinneok is part of the Oxis Alliance. Stretching from the farmlands of Vervand to the intensely mineral and ore-rich Sukērumaunten, Shinneok is a valued member of the alliance. Shinneok is known for the vast quantity of natural resources they mine and log and the valuable herbs and medicinal flowers found in the northern shrublands. Presided over by the Kura family for generations, Shinneok takes on its values from their rich history. The people of Shinneok favor a balanced lifestyle where they explore all life has to offer. Though valuing education, the people of Shinneok place their true worth on self-discovery. In fact their capital city, Mūnano Hansei, features a giant botanical garden known as Heiwa, where residents love to spend their free time reflecting amongst nature. The bravest and most spirited individuals seek to explore the dangerous area beyond Sukērumaunten. The most studious often go to study in Ulos to master the arcane arts or even a skill. Those who carry the value of Shinneok to their hearts seek no glory. Most often these individuals are young adults seeking to explore the world before settling down to work at a mill or in the mines and provide for a family. Quiet contemplation and a simple life is far more worthy lifestyle than one of splendor to most citizens.

Not a law, but it is good practice for those who live in the countryside to take in travellers for the night.

Sukē Nera is a small island at the very south-western end of the Shinneok archipelago, situated between Ley'Ork and Nahrūl. Due to its location, it is a frequent stop for merchant ships that are travelling to or from the eastern countries of Pthora and Nahrūl. The port town of Aquino is the largest and most populous town on Sukē Nera, as the rest of the island is covered with rocky terrain and sparse vegetation. The black sands near Aquino, for which the island is named, are famous for blowing into Sukē Nera glass. It, however, is very rough and abrasive in its natural state, and also extremely inhospitable to plant-life.

Aquino - This town has a very prominent dock, which is nearly always filled with a wide assortment of various trading and merchant vessels. The town itself is famous for its striking black sand lime brick buildings adorned with vivid splashes of colored flags and signs, using imported dyes from Arenti. There is a tavern named “The Opal Quay” near the docks, owned and operated by a lizard named Hestur. The main floor has a small “dock” in the middle that connects to the canals of Aquino, which is a popular stop for the gondaliers of the city to take people to and from the docks and bar. The upper floor is a balcony with a cutout in the middle that opens to the floor and canal below. A secret basement, accessible through the kitchen, acts as a meeting space for Ystervuis agents. 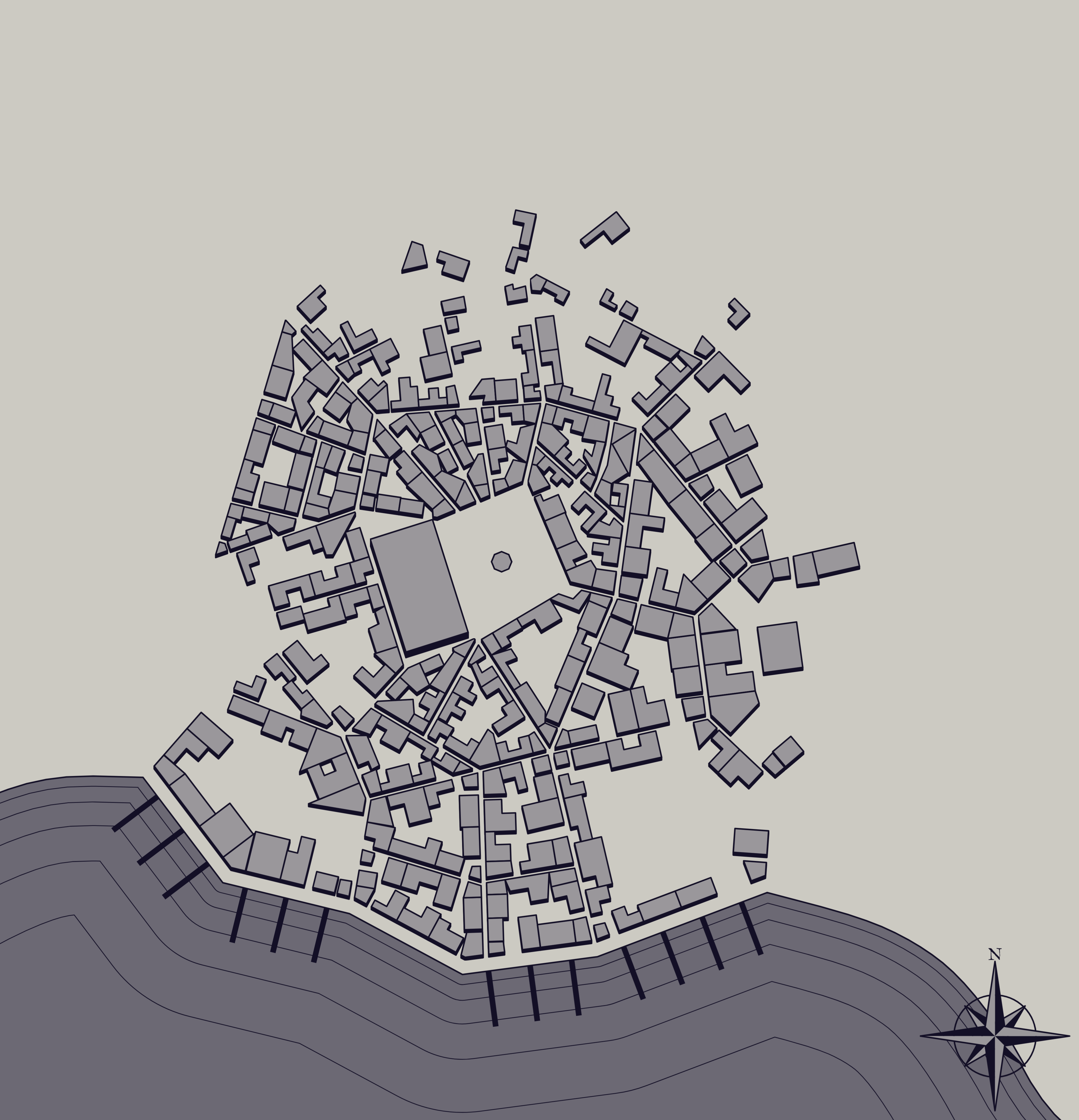 The town of Aquino is also famous for its annual, week-long Mid-Akvofojo Festival, as the lower walkways and streets become flooded, creating numerous canals. Colorful gondalas serve as the town's main form of transportation during times of high tide, and floating wooden walkways and bridges are set out for pedestrians. In the middle of the week-long festivities, the colosseum is allowed to flood and a Grand Bout is held, where adventurers come to display their prowess against various creatures, competing for exquisite prizes.