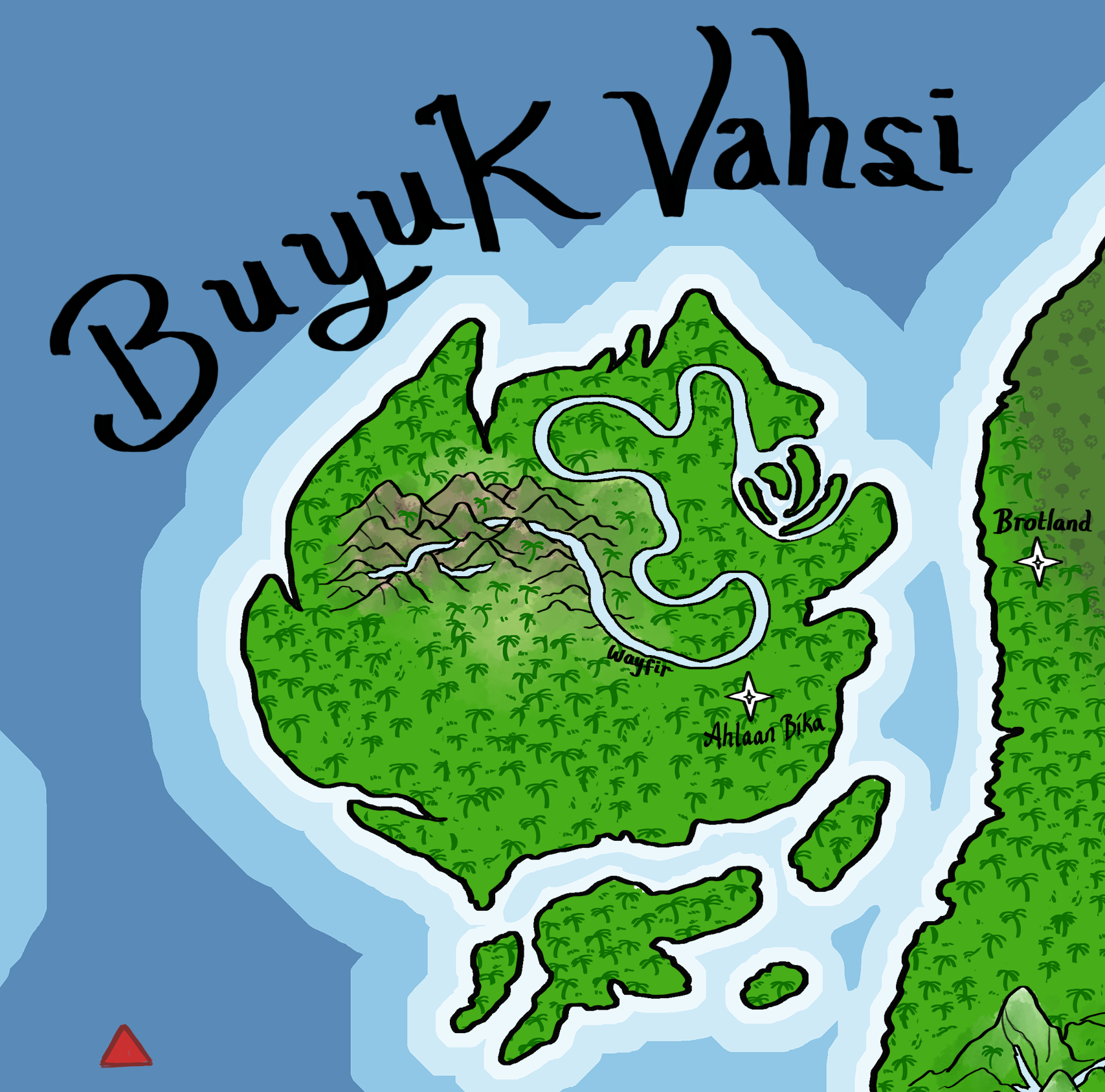 Buyuk Vahsi features a sprawling rainforest above ground, and a strange, unconventional rainforest below ground. The underground rainforest has an entirely different ecological makeup than the one above it, and has almost alien-like fungi, plants, and creatures, all adapted to thrive in low light and damp conditions. Weaving through the small continent is the Wayfir river, which forks in the central mountains, one branch flowing west to east above ground, and the other branch spiraling counter-clockwise below ground.

Encircled by a chaotic rainforest, the people of Buyuk Vahsi live in one of the twinned realms of their nation. Buyuk refers to the underground jungle that lies just beneath the surface - holding most of the world’s elves in a free-form, if slightly negligent, society. The surface is where most travelers are familiar with - referred to as Vahsi. Incredibly welcoming and open, self-expression and freedom is the predominant cultural trait. Vahsi is notable for a lack of a proper legal system or documentation, holding nothing resembling a code of law or legal constitution.

These twinned nations, while similar in their general pacifist nature, differ in demeanor and which race is in the majority. The elves of Buyuk are largely Saedic Elves characterized by gaunt bluish pale skin, dark eyes and hair. These elves are sometimes referred to as 'Drow' or 'Dark Elves' but are known to resent those terms. These elves also widely hold the cultural belief that, due to their strong ties to the ancestral grounds, they hold greater power and significance to their god than those of mixed or differing descent. The elves of Vahsi hold no such belief and are widely Dahahbi elves characterized by their tanned skin, golden hair and bright crystal eyes. Dahahbi elves are so named due to their original ancestral migration from Dahahbu to Vashi, where they then eventually adopted the worship of nature.

The people of Buyuk Vahsi generally believe in and worship these gods:

While the citizens of both Buyuk and Vahsi recognize these gods, only Buyuk has a somewhat organized theocratic structure. There are generally six holy titles that govern the church in Buyuk: above all, The Revered Mother/Father. Then comes The Herald, a vice leader of the church. Below The Herald comes the three Honored Fathers/Mothers, which each possess separate duties within the church and government.

The elves of Buyuk Vahsi commonly play a game called Witch-Queen's Gambit, which traces it origins to Dahabu. The rules of this game can be found on the Dahabu page.