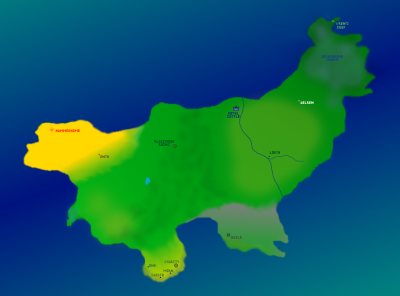 Irlany is a large landmass roughly 1200 miles to the southwest of the Rhine Archipelago. Most of the island is self-sufficient, though the occasional trade vessel does come and go.

After King Charles's coronation, adventurers largely considered their task done, returning to their homes. As such, events have mostly calmed down, and the vast population accepts Charles, who has turned out to be a fairly good monarch.

Since Lord Charles has taken the throne, he's dedicated most of his effort to hunting down, and imprisoning and/or executing those who were part of the assassination of King Stephen. He's also found a number of people who were plotting to kill him or any of the other lords during the time before the succession, and given them much the same treatment.

In the years since, he has proven himself to be a capable and just ruler, garnering the support of the general population.

Lord Charles' previous advisor Sarah has been named as the Lord of the region previously controlled by Lord Charles. Her initial decrees have largely been to keep with the old ways, though she has greatly increased the number of people employed at the palace, which, in turn has helped the economic situation in the main city (Charity).

Directly after the coronation, a few servants were imprisoned for attempting to steal for the palace, but these instances have since ceased to occur. Another servant suffered a death at the hand of poison and is largely blaming on a feud with another servant, likely a lovers quarrel.

Assassinated by poison, his unfinished business with the other lords meant his soul refused to pass on, essentially becoming a ghost. To this day he passes around the island, seeking for his killer and to get revenge.

Rumor has it that sometimes, he can be found wandering his old home in the northeast of the island.

Considered a hero after his wonderful performance protecting the piece during the succession and is held in high regard by the locals. He still mostly secludes himself to his wastes, and he is largely left alone to do so.

The world is currently under construction.

He is a well thought of lord with a friendly personality. He keeps all of the citizen of the land happy and content. After his adviser was killed in a tragic accident involving bandits, his new advisor Sarah has taken the reigns and it has been more of the same. He is very quick to anger when people go against his wishes. The loss of his previous advisor has had a noticeable impact on him and he tends to travel significantly less than in the past. He controls the southwestern part of Irlany, which has a series of pristine beaches with a great forest in the center area. There are villages scattered throughout it's southeast section, and a large city on the southeastern coast.

Lord Vren was an illusion master, consistantly putting out illusions that were so powerful they almost felt real. After the king declared he was searching for a heir, Vren began putting his plans into action, by having new adventurers steal a crystal to boost his magic. Vren was 5'10“, dark green hair and always wore his red cape. Very seldom was he actually seen, and would do buisness with his clone illusion, Nerv. who had red hair and a green cape. He was very intelligent, and would usually spend his free time researching. He governs the northern tip of the land, which is mostly covered by marshes and farmland.

One day, however, he was poisoned and murdered in mysterious circumstances. No one seems to know much of what or how.

17 years old, tall, and too lost in the passions of youth for his own good. He was thrust into being the head of his family at a large age, and has been somewhat spoiled by the treatment he's received. He tries to cover himself head to toe in his wealth, wearing fine red silk, detailed with gold most of the time. Surrounding himself with beautiful women, he quickly found himself distracted from the succession dilemna. He was the original one to contact adventurers, and the primary portal still rests in what used to be his lands. Lord Andross controls the middle southern area, and are isolated from the mainland by a mountain range.

After the coronation, incriminating evidence found led to Lord Andross and Natasha both being sent to a maximum security prison. Nobody knows for sure where it was, as the king ordered the memories of the event be removed from the guards who brought him there. For the first few years after Charles's ascension, a rebel faction existed that tried to find and free him, but has seemingly faded.

Lord Braken Hammerstone of the Wastes oversees the desert region to the north west. His people are a strong and hearty one used to living in such hot and barren conditions. Deep in the desert they have found small pockets of gems and ores in which they mine and forge in order to trade for other resources. Lord Braken does not covet other lands or power. Like the shifting sands of the desert he too knows that empires are meant to rise and fall at the whim of fate, but as always his people live on. He only seeks to maintain leadership of his people and stakes over his homeland. “Let all the other petty lords fight for power it matters not whose feet i kiss once a year, as long as my people remain and my homeland secure. It’s all a Hammerstone can ask for.”

Content to work in the background, Marcus Blackwood is a professional adviser. He's been an adviser through several generations of lords, and is content to be a figurehead.

Uncharacteristically drawn into the midst of things, he was found murdered barely two weeks after adventurers began showing up.

Starkweather is an older human, perhaps in his mid-forties, with brown hair peppered with gray, and a closely trimmed beard. If one were to describe him in a single word, that word would be sturdy. He is many-scarred, and his hands are deeply calloused, but through it all he has remained, unbowed, unbent and unbroken. He sought to put King Stephen's bastard son Arthur on the throne.

When Lord Charles ascended the throne, he wasted no time in disappearing. Neither he, nor Arthur have been seen or heard from since that night. Their whereabouts are currently unknown.

Tall, blonde, and willowy, Sirona the Elf is an herbalist and a powerful alchemist. Given the right herbs, she can make just about anything, from a potion that will call someone back from death’s door, to a deadly toxic cloud. Her inclinations however, are towards beneficial items, potions that heal or empower the imbiber. She was a friend of Alexander Starkweather, and according to rumors was at one point his lover.

After Charles took the throne, she left Irlany, wandering the isles for sometime before setting up shop on the newly discovered Ageron, where she remains selling potions, poultices, and various herbal remedies.

While it was unknown to adventurers until the year 10069, an issue of succession drew a group of new adventurers into it's political roil. The time of King Stephen was drawing to an end, and he had no proper heirs. The king decided that he would relinquish the throne to the most worth of the four Lords of Irlany.

New Player Campaign, Fall 2015
Politics, murder, adventure and more!
jk most people were terrible at writing up games then.

All knew that King Stephen was not long for this world, and because of this nobody expected somebody to bother to assassinate the man. However, on the day he had decided to announce the successor, 4/8/10069, he was slain. Lord Braken Hammerstone, being considered a disinterested party, and therefore not a suspect, joined with the head investigator Sir Locke to discover the source of this travesty. The event meant to celebrate the new king became an event to remember the old one, and people continued with the event while the investigation continued to go on. The kings will went missing during this time, and the investigation had to spread to find the will.

During this time, adventurers were instrumental in stopping further assassination attempts, and ultimately delivering the will to Braken Hammerstone, who read the name of Lord Charles, to succeed the throne. Though the killer was not found that day, the investigation continued, and continues to this day.

On 2/13/10071, a minor village roughly halfway between Enth and the Blackwood Ruins seemingly vanished. Reveal the Past shows the civilians disappearing one a time, before a force that suspiciously seemed like invisible giants appeared to rip the structures of the village out of the ground and stuff it into a portal bag. Not long before, someone had broken into the royal castle and stolen the physical throne, leaving only the mysterious message “Deus was here”. Some weeks later, the throne was returned, but the mystery would be cause for gossip and storytelling for years to come.

Lord Andross is dead.
Literally no one knows what happened to Vren. Not even the GMs involved at the time.
In the caves of the eastern part of the mountain range north of Guile is the remains of a gnomish civilization. Below the abandoned city is the lair of a black dragon.